In 2018, local developer, CDMA Australia (CDMA) lodged a planning proposal for its site at 34-42 Tallawong Road Tallawong, located directly opposite the Tallawong Metro Station and future Town Centre, applying to increase the height limit from 16 to 26 metres, together with a Voluntary Planning Agreement to provide a public plaza of 2,200sqm for community use.

CDMA Australia Development Manager, Alex Guan said after three years of coordination with the NSW Department of Planning, Industry and Environment and local Blacktown Council, the planning proposal was gazetted and officially took effect on 30 September 2021.

“The height limit of the buildings was increased to 26 metres and the residential yield was increased from 630 units to approximately 900 units subject to DA approval,” he confirmed.

“Significantly, the development has set a new precedent for heights in the area,” he said.

Designed by architecture practice, Kann Finch, the $700 million master-planned development will include nine buildings each at eight storeys in height and subject to DA approval, is due to be completed within six or seven years.

CDMA’s development application will bring major new amenity to the Rouse Hill / Tallawong community. A new public piazza will comprise two main zones, on open paved piazza fronting the street and internal green lawns. The plaza will offer a vibrant and engaging public domain experience for local residents which comprises a retail premise and public open space area accessible by all members of the public. A play area will also be provided to encourage children play and interaction within the public domain.

The plaza seeks to address the need for open space and community infrastructure within the Tallawong Precinct. This provides an opportunity for residents to interact within the public domain and introduces multiple site links to connect the site with the surrounding street network.

A green spine comprising a sprawling village green lawn and communal facilities will run through the middle of the development surrounded by an extensive running track.

The concept design seeks to create an attractive landscape setting that reflects the surrounding natural bushland character of the Rouse Hill area, while providing a diverse range of outdoor passive and active communal spaces for the residential population.

In addition to this a publicly accessible plaza, comprising lawn and paved areas is proposed to provide a new community space not only servicing the developments population but the surrounding growing community.

The development will be conveniently located directly opposite the Tallawong Metro Station and new Town Centre which will house two major supermarkets including a Woolworths as well as other specialty retailers. 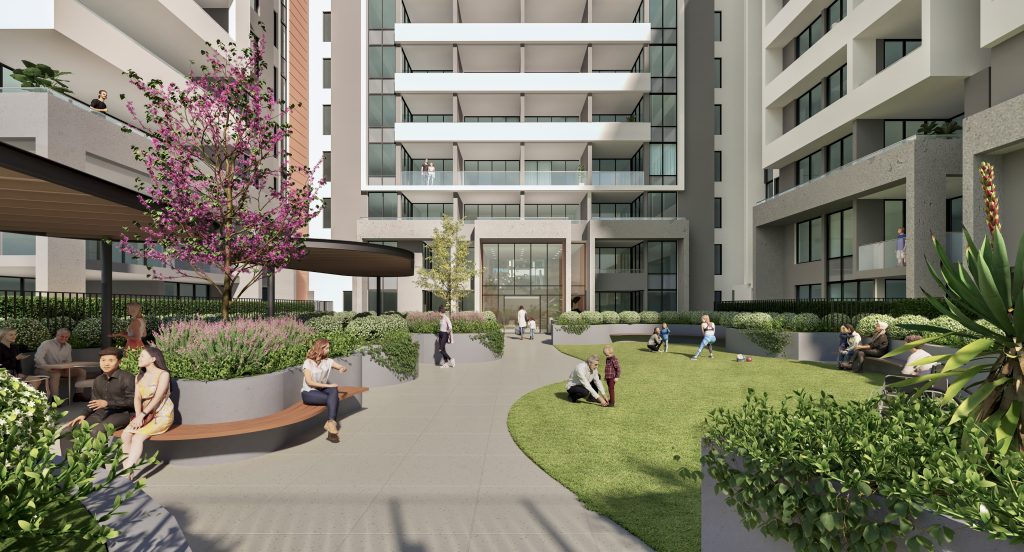 CDMA Australia’s CEO Richard Wu said since CDMA had entered the Australian marketplace in 2017, the company’s development pipeline had grown gradually with three significant projects either underway or in planning.

“Our first project, Rosella Place has completed its first stage and is now sold out and settled while the second stage will start construction early in the new year.

“Our second project consisting of 900 apartments is located at 34 Tallawong Road and our third project consists of a large-scale masterplanned community in Leppington which we will work on in coming years.