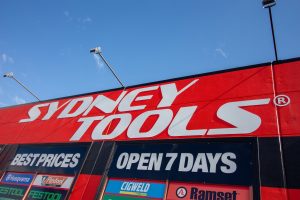 Australia’s fastest growing professional tool specialist, Sydney Tools, is set to continue a rapid expansion nationwide, announcing ten new stores in 2020. Confirming the next phase of its national growth strategy today, Sydney Tools Director Jason Bey said the group was set to open five additional stores in Queensland, and one each in NSW and Victoria. Mr Bey said the company also has plans to expand into three new markets, with negotiations being finalised for new stores in Western Australia, the Northern Territory and South Australia – the first stores to open in these markets. “We’re proud to say we’re on track with plans to double our eastern seaboard footprint over the coming five years, and to expand into Western Australia, the Northern Territory and South Australia this year, followed by Tasmania,” he said. “As mooted in 2019, we’re on target to have 70 stores opened within the next five years, employing more than 1000 people nationwide.” Sydney Tools is the second-largest industrial power tool and accessory retail specialist in Australia, with 34 stores across NSW, Victoria and Queensland.

Founded in 2001 as a family business and incorporated in 2005, the privately owned company has a strong and enviable reputation for offering the best brands, service and prices. Major brands include Milwaukee, Makita, Dewalt, HiKoki, Festool, Fluke, Ramset, Husqvarna, Sidchrome, Bahco, 3M and Cigweld.

Over the past 22 years, the company has grown its share of the trade tools market by stocking a wider and deeper range, which now spans more than 11,000 stock-keeping units, and favouring American, European and Japanese brands over cheaper versions.

Opening its 34th store in Queensland in late February at Underwood in Brisbane’s south-eastern suburbs, Mr Bey said other new branches launching in 2020 were:

· Queensland: Kunda Park in Maroochydore on the Sunshine Coast, the Brisbane suburb of Virginia, Carrara, on the Gold Coast, and Townsville in north Queensland.

Sydney Tools’ store expansion comes as multiple companies across the nation move to consolidate and/or rationalise floor space and store operations. “While our online sales are growing rapidly, more than 94 per cent of our revenue has been generated through our bricks and mortar retail outlets. Customers like to see and review the product first hand, which is allowing us to expand in a way counter to most retailers. You can say we’re a bright spot in a struggling retail economy,” Mr Bey said. Ongoing demand for capital equipment, accessories and hand tools is also being driven by

Sydney Tools delivers Australia-wide on a daily basis through highly regarded couriers to ensure customers receive their goods on time and in new working order.

The Sydney Tools stores opening hours are as follows: