It is a master-planned project consist of 911 apartments across nine towers with green spine and it will provide a public accessible plaza of 2,200sqm for community use.

CDMA Australia Development Manager, Alex Guan said after careful, diligent coordination with the NSW Department of Planning, Industry and Environment and the local Blacktown City Council, we are delighted to announce that our Development Application for our second project in Tallawong has been approved.

The accelerated approval process of only 11 months assists CDMA to bring such a large number of apartments to market sooner, adding it is one of the quickest DA approvals in the precinct among similar scale residential projects.

Significantly, the building form approval sets a new precedent for heights in the area followed by previous approval of Planning Proposal that increase height limit from 16m to 26m.

Mr Guan said that the engagement of their Planner, Urbis together with Architect Kann Finch Redstone and muti-discipline consultants were key in getting their Development Application approved – fast tracked in the vicinity from 6 to 9 months and CDMA is grateful to work closely with such professional and efficient team to achieve the desired result.

“We would like to thank Blacktown City Council for the diligent way in which they worked through our Development Application to reach an approval. We are most grateful.” 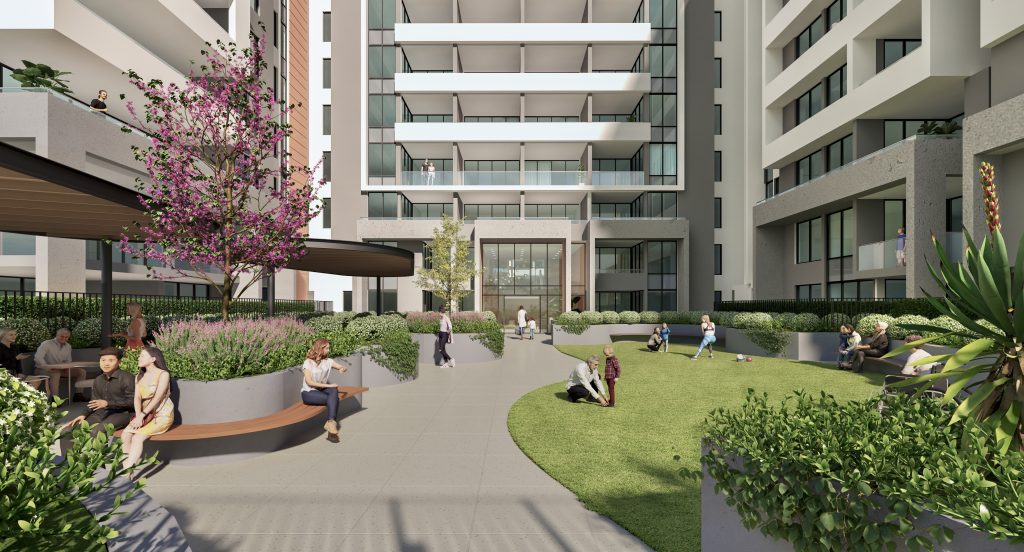 A new public piazza will comprise two main zones, on open paved piazza fronting the street and internal green lawns. The plaza will offer a vibrant and engaging public domain for local residents and the surrounding community which comprises retail spaces and public open

area accessible by all members of the public. A children’s playground area will also be provided which will further encourage interaction within the public domain.

A green spine comprising a sprawling village green lawn and communal facilities will run through the middle of the development surrounded by an extensive running track.

CDMA’s new development seeks to create an attractive landscape setting that reflects the surrounding natural bushland character of the Rouse Hill area, while providing a diverse range of outdoor passive and active communal spaces for the residential population.

The development will be conveniently located directly opposite the Tallawong Metro Station and new Town Centre which will house two major supermarkets including a Woolworths as well as other specialty retailers.

The developer has already seen strong demand for its current residential development, Rosella Place located at 56 Cudgegong Road Rouse Hill, with only a limited number of apartments remaining for sale.

Named after the vibrantly coloured Australian bird which is native to the Rouse Hill area, Rosella Place offers a peaceful, safe community with 357 apartments set across five mid-rise buildings located within a short 100m walk to the newly opened, Tallawong Metro Station.

CDMA Australia’s CEO Richard Wu said since CDMA had entered the Australian marketplace in 2017, the company’s development pipeline had grown gradually with three significant projects either underway or in planning.

“Our first project, Rosella Place has completed its first stage and is now sold out and settled while the second stage is under construction and final stage will kick-off early in the new year.

“Our second project consisting of 911 apartments is located at 34-42 Tallawong Road and our third project consists of a large-scale master-planned community in Leppington Town Centre which we will work on in coming years.

For further information on CDMA visit cdmaaustralia.com.au or call 1300 828 803.