When Gary O’Meara landed a key position in the city he’d hoped to relocate to for 11 years, Wollongong, there was only one thing missing – suitable office space.

Based in comfortable but uninspiring offices outside the Wollongong CBD for around 30 years, the firm needed commercial space better reinforcing its global brand and growth, that was easily accessed by potential and existing clients, and offered solid employee benefits.

The space must allow Gallagher’s to consolidate its position in the rapidly expanding Wollongong, Illawarra and South Coast markets, to have their “fingers on the pulse and to be in the middle of the action”.


“Consolidating and growing our business in Wollongong is a no-brainer,” Mr O’Meara said. “It’s a major centre, which is now benefiting from the pandemic-led bleeding away of workers and businesses from the centre of Sydney to outer regions such as this.”

The firm inspected a number of properties in October last year before viewing a second floor 268 sqm A-grade commercial office space at 31 Crown Street Wollongong. It was “love at first sight”.

“We fell in love with the CROWN building the minute we saw it – it ticks all the boxes for us,” he said. “It’s an inviting commercial space, funky, and we could see the potential for a fit-out that would be very modern and easy on the eye to reflect our brand.”

The mixed-use building presented by St Trinity Property Group was centrally located and highly visible, bordered by Crown, Burelli and Corrimal Streets and close to multiple clients “in the heart” of with the fast-evolving CBD.

Commercial property in Wollongong seeing a resurgence due to pandemic

St Trinity Property Group Managing Director Nicholas El-Khoury said Gallagher’s was one of three commercial tenancies leased in recent months, with the company seeing extraordinary renewed interest in the Illawarra in both the commercial and residential markets.

Ground floor space at St Trinity’s CROWN Development had also been leased to national engineering firm Indesco, and separate space to skin treatment company The Cosmetic Lounge. The development is filling up fast, with a selection of prime leasing spaces available on Crown Street adjacent to the Coffee Club.

“The area’s competitive pricing and leasing opportunities relative to Sydney, its diverse and dynamic local economy, and appeal as an area in which employees could enjoy a sea-change and enhanced quality of life are among key factors adding to the region’s appeal,” Mr El-Khoury said.

“For businesses, Wollongong and the Illawarra represent increasingly appealing alternatives for those looking to streamline costs and retain workers,” Mr El-Khoury said. “We estimate commercial, office and retail set-up costs at around 30 per cent less than metropolitan areas.”

“Along with this competitive price differential and the region’s lifestyle appeal, we’re witnessing the unprecedented reassessment by individuals and businesses of exactly where they need to be based, and if that ‘base’ can actually be shifted away from traditional metropolitan hubs for both improved life and work outcomes.”

Importantly for Gallagher’s staff, Mr O’Meara said, 31 Crown Street sat one block from the beach and the opportunity for daily swims, one block from WIN Stadium, with onsite parking, a café, sushi bar and other facilities.

“Being close to the beach was a must for me, and the staff love it. It’s a unique advantage and benefit,” Mr O’Meara said.

With staff due to return to the office in January under new flexible working arrangements, the company has now signed a five year lease with a five year option.

“Covid has shown us that people can work anywhere, and work well and harder. But we think this new office space will encourage our staff to be collaborative once again as well. It’s a great way to start the new year and start back after a year of working remotely. We’re very excited about the opportunities it brings.” 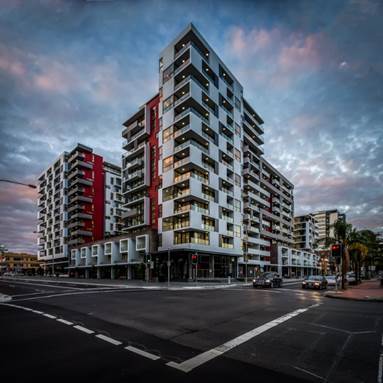 Mr El-Khoury said hand-in-hand with renewed interest in commercial property, St Trinity was witnessing extraordinary levels of demand for quality off-the-plan plan residential property. The group has more than 20 years’ experience in the Wollongong and Illawarra areas as a leading property developer and an independent project sales and marketing firm.

“One of the few pluses we’ve experienced as a result of this pandemic is that regional cities with proximity to major metropolitan areas such as Sydney are enjoying renewed attention and support, as working from home becomes more entrenched and businesses more flexible.”

More than 300 expressions of interest had been registered in the $50 million development at 2 Surfleet Place since launched.

“Ridgewaters Kiama is the only development on the South Coast offering exclusively three-bedroom apartments, some with media spaces, designed specifically to cater to this unprecedented demand for flexible sea-change, owner-occupier residences accommodating a range of changing needs.”

Mr El-Khoury said the project was due to officially launch this month, with construction due to begin in December 2020, and completion expected by Mid 2022.

Two years ago when Australian engineering firm Indesco announced plans to expand, it confirmed it was opening a third office in an area offering significant growth potential – Wollongong.

Its strategy was a successful one, with the national civil engineering and landscape consultancy confirming its intention this month to relocate and upgrade its Wollongong base.

From early next year, the firm will relocate to A-grade commercial offices in St Trinity Property Group’s 31 Crown Street at the corner of Crown, Burelli and Corrimal street’s in the city’s CBD.

Indesco Chief Financial Officer Anthony Pickrell and National Head Structural Engineer Aaron Hazelton said the space allowed the firm to strengthen its corporate branding, and to help grow and consolidate its position in the local and regional market.

“We’re seeing significant growth in regional areas, towns and cities around Sydney as a result largely of Covid-19, and we’re now undertaking a lot of work in Wollongong, the South Coast, and Newcastle,” Mr Hazelton said.  “This includes a number of aged care clients along the south coast, as well as multiple new developments.”

“We wanted space that was better aligned with our commercial offices in Parramatta Square in Sydney and Civic in Canberra, that would benefit our customers, and be closer to government hubs and clients.”

Mr Pickrell said the firm had entered into a five year lease with a five year option for a ground level 186sqm space at 31 Crown Street, with fit-out currently being undertaken by St Trinity. It positioned Indesco closer to government and key infrastructure, in a high visibility spot, offering ample parking and onsite features, including pool access. And, its proximity to the beach was a major drawcard for employees, who appreciated the lifestyle benefits it brought.

“We wanted the best possible outcome for both staff and customers.”

Indesco is a leading civil engineering and landscape consultancy operating for more than 30 years and working on both private and public projects throughout Australia and South East Asia.