Leading Sydney based property developer, Level 33 is continuing its ongoing support of the local community in the St George area, by donating $30,000 to Kogarah Public School to upgrade its playground area.

Level 33 is nearing completion of its $175 million Kogarah Central residential community, which is located at 71-97 Regent Street, opposite the highly regarded and popular primary school, which currently educates a community of 485 students and offers classes ranging from Kindergarten to Year 6. The project has been under construction for the past two years commencing in late 2019.

Principal of Kogarah Public School, Mrs Nitsa Comninos said the school was grateful to receive the donation, which would go towards upgrading an area in the playground including installing a section of artificial grass and a large shade shelter.

“We would like to thank Level 33 for this generous donation,” Principal Comninos said.

“This will allow our students to enjoy the playground in a wider outdoor learning environment, and will be some consolation for the impact that this build has had on our school environment.”

Level 33 prides itself on contributing to the local communities in which it develops.

Eddy Haddad of Level 33, said, “Level 33 is delighted to make this donation which we feel is a meaningful contribution to such a valuable educational institution, the Kogarah Primary School and help support the local community.”

“Education and helping our future generations at a grassroots level is important to us as a proud local business,” said Mr Haddad.

“We’re honoured to support the local community and help improve our local school.” 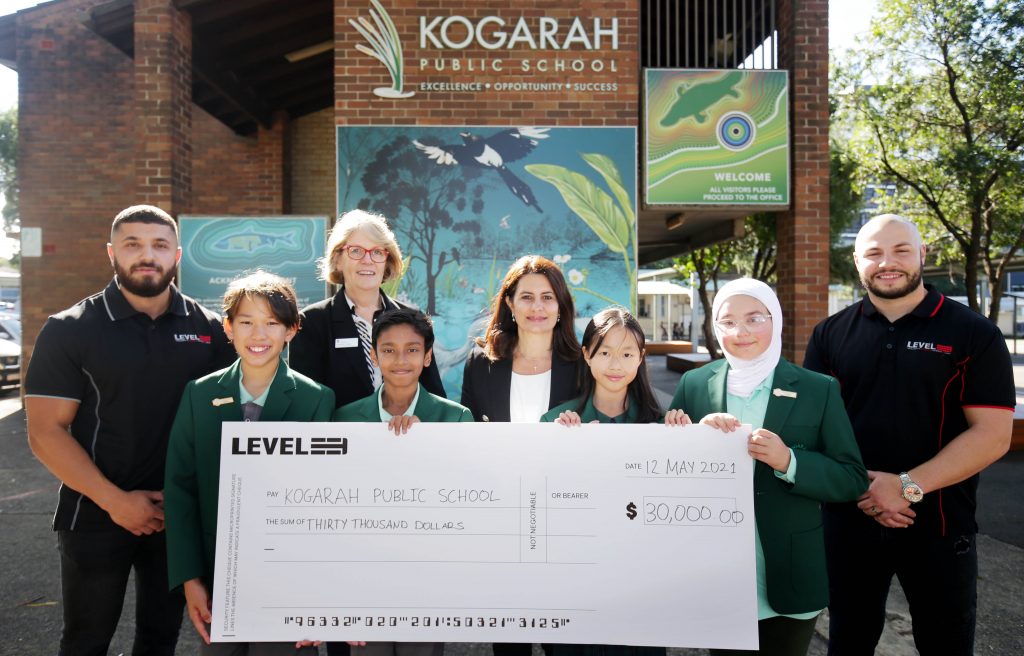 Since establishing in 1999, Level 33 has developed over 20 premium residential projects, many of which have been located in the southern Sydney region including Kogarah, Wolli Creek, Rockdale, Blakehurst and south to Wollongong.

According to Mr Haddad, Kogarah Central has received a stellar reception by the market.

“We have found that our purchasers are coming from different areas of Sydney and loving what Kogarah has to offer by way of convenience, connectivity to the city being only 20 minutes away and a very attractive price proposition.”

Kogarah Central offers a prime location, in walking distance to two of Kogarah’s most highly sought-after schools, within 400m of the Kogarah Train Station and the set to be revitalised Town Centre. It holds strong appeal for first property purchasers or young families looking to purchase a modern, spacious, designer new apartment. Kogarah Central is also only a short 20 minutes’ drive to the Sydney CBD and is in easy access to a range of public parks and the Botany Bay foreshore.

According to Mr Haddad, Kogarah Central will be the first project for Level 33 in Kogarah amongst many more that are planned in the area for the growing developer. He added: “We have a strong attachment to the area and we wish to continue our investment in the St George area and its great community.”